Recently I read an interesting post on My Messy World about organising with the Konmari Method. When I saw that Karla used Curver boxes to store her things, I felt compelled to come out to her as an organising freak, Curver ware fan and general box lover. (I love boxes even more than my cat does, which is a lot.)

Not knowing what she was asking for, Karla suggested that I share my own ideas for organising. In keeping with the mood of the Boxing Day, here’s my own take on it. It’s organising with the Mara Method, or, when in doubt, box it.

While this is not a sponsored post, I encourage the Curver manufacturer to pay me for this endorsement – preferably with boxes. Also, if you wish to use a free version of the box-it method, cardboard boxes will do just fine. Though the images below may be misleading, please note that a cat is not required for the Mara Method.

Large boxes to compartmentalise the closet 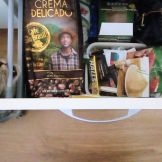 Boxes for condiments, plus a hungry cat

Laundry basket and drawers for the bathroom 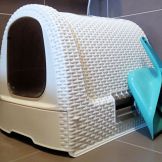 Boxes to make up for lack of shelves in the bathroom 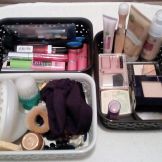 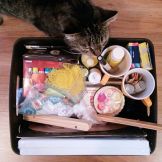 I’m a promiscuous person. At least as far as blog themes are concerned. After some three months with Sela, I exchanged the poor babe for the brand new Nucleare.

With changes in my personal life (for the better) and the change of the season to spring(ish), I deliberately went for a brighter, bolder look for my blog. While I understand that the change from clean and neat to busy and colourful might not appeal to everyone, I’m more or less happy with the outcome.

There is still some fine tuning to do though. And here is where I’d love your input! Please vote in the poll below and/or tell me in a comment what you (dis)like about the current design and functionality and what changes you’d like to see. Your ideas are much appreciated!

I was invited for a mission to Mars – more precisely, I was challenged by the blogger behind The Mission to Mars to join in the Spread Beauty Challenge. Here is how it works.

Beauty is me in the dark.

Beauty is me when I’m drunk.

Beauty is me when nobody looks.

Beauty is lost and found property.

Beauty is love, life and liberty.

I realise that I only produced five sentences, but I can’t be bothered bothering you with writing even more nonsense than this. You’re welcome.

“Beauty is truth, truth beauty, – that is all / Ye know on earth, and all ye need to know.”

These are the closing lines of John Keats’s poem “Ode on a Grecian Urn”. I have no idea what it means, but as an EngLit graduate, I’m obliged to be pretentiously smart.

Ramblings of a College Introvert

You: Does the challenge appeal to you? Feel free to take the torch from here! The nomination is open.

I was invited by the lovely Juliet Qoey to participate in the Spread Love Challenge – thank you, I’m happy to join! These are the original rules.

I took the liberty of softening the rules a little, since I like to masquerade as a loveless person and can’t lose my face. What follows then are five quotes on love from various songs by Muse. Click the links to listen to the songs.

Could be my unintended.

Something beautiful, a contradiction.

Love is our resistance.

Love will be forever.

Aimee from Musings and Pseudonyms

Madvanthi from The Epic Blog

Kay from Suddenly They All Died

You: Does the challenge appeal to you? Feel free to take the torch from here! The nomination is open.

This is the crazy cat lady’s heaven. 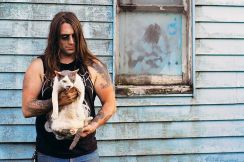 A rocker rocks a cat

Below is a selection of before and after photos from the abandoned town of Pripyat, Ukraine, heavily affected by the 1986 Chernobyl nuclear plant disaster.

As a Czech native, albeit not a particularly patriotic one, I’m now doing the obvious: sharing a random sample of domestic musical production.

Bílá and Hapka: “Watching You Sleep”

The lyrics are the pledge of a woman to her partner to stand by him even when everybody else condemns him.

Nohavica and Kirschner: “The First Night in a New Flat”

The lyrical song muses on the first night in a new flat, where the kitchen table symbolically divides and connects the couple.

Landa, “A Postcard from the War Front”

The song describes the infatuation of a young man with war, which he comes to choose before his lover.

To say that I decided to furnish my new home with Ikea products sounds too much like a voluntary choice. In fact, I was reduced to condescend to Ikea, the quality of whose produce I always deeply doubted, to meet my need for light and flexible furniture, easy to assemble and easy to move. After all, I might be evicted from my rented flat as soon as the landlord discovers that my cat is not as house trained as I misleadingly suggested; actually, she is not house trained at all because it is her first time indoors. Oops.

At first I anticipated that I would be left with no option but to live in an unfurnished flat, sleep on a second-hand mattress on the floor and store my belongings in cardboard boxes. Visionary optimism was never my flaw. It was then much to my surprise, even shock, when my soon-to-be-divorced husband agreed to let me go not only with my personal paraphernalia but also with a little pocket money. With the pocket money I intended to buy a packet of Oreos and all new home furnishings. Because you can’t very well split one household into two, and why not leave old things in the old home and get new things for the new one? A woman’s logic? Or, perhaps, logic.

I spent eight hours a day, repeatedly, diligently researching the Ikea product range and creating elaborate shopping lists after registering with the company and giving up all my personal data to be misused as the corporate power sees fit. I soon grew better informed about Ikea’s assortment of goods than the most passionate Ikea employee and started to consider applying for a full-time job with the Swedes. I would be doing what I was doing anyway, except I would be paid for it. But then I reminded myself of my English Literature Master’s degree, and my doctoral thesis, and resolved that I’d try to do better than Ikea. Maybe the Finnish Asko? Not the Austrian Kika though because the Austrians used to occupy us during the Austrian-Hungarian Empire and I never quite forgave them.

Equipped with a shopping list running for miles, I entered the dark depths of Ikea to preview items on my list and check how much the stunning product presentation on their website differed from the shabby reality. The crowd of shoppers pushed me straight into the Ikea cafeteria, as everyone seemed to have a craving for Swedish horse meat balls and – typically Scandinavian – French fries. I grabbed a bottomless coffee cup, which fortunately did have a bottom, and a chocolate cake, because I’ll soon be poor enough to get a dessert only when the Hare Krishna guys come chanting around and give away what are presumably weed chocolate cookies.

With my sugar and caffeine levels replenished and my wealth nearly depleted, I obediently let myself be carried by the crowd deeper into the bulging belly of the building. I gave up my presumptuous plan to choose my own direction for shopping, which was rendered impossible by the teeming multitude of pregnant women, pregnant women with partners, pregnant women with children already in tow and pregnant women with mothers, cousins and friends (not pregnant with them but plus-oned by them). Damn it, what if the staff discovers that I’m not pregnant? And worse, that I’m not just married but almost just divorced? Am I even allowed, or will I be expelled from the premises for causing a public nuisance? I curled up internally and tried to blend with the crowd.

I soon noticed that many shoppers regardless of the stage of their respective pregnancies push – and pull – cute shopping bags on wheels provided by the retailer. Ooh, I want one of these too! Not stopping to consider whether I even qualify for this special treat, I summoned all my strength from my earlier immoderate coffee consumption and bravely broke loose from the streaming mass as much as I could. Which wasn’t much; just enough to dive in a side aisle, make a risky U-turn and casually steal a bag on wheels from a cage dispenser which looked like a trap that would snap anyone not approved to operate those little lovely trolleys. This particular trap was apparently broken, though, so I got away with the theft and the trolley.

As I was flying away on cloud nine, the trolley swished at my tail with sweeping movements, knocking down unmounted items and unattended kids. Equipped like a cool shopper, I incurred a sudden bout of ill-advised excitement about the capitalist perks of Free Choice & co. ltd. and made a series of impromptu purchases to add finishing touches to my as yet non-existent new home (and to earn the right to use the trolley bag). I bought:

The first piece of furniture I came across was, aptly for a literature scholar, the bookcase. I preselected two medium-sized bookcases, one white, the other the same in red. The red one was twice as expensive as the white one – come on, that’s discrimination based on the colour of the chipboard, you racists! I gently ran my fingers along the red shelves though, and I knew she would be mine. Next I came across what looked like a childsize version of the home office table I picked online. It turned out to be the actual life size after all, something of a concession to my soon-to-be more modest circumstances when compared to my huge old workstation occupying a quarter of the room.

In front of the table there stood a nicely designed round-shaped swivel chair. I loved it in the catalogue but thought it wouldn’t be comfortable enough for a person who practically lives in her chair. I collapsed on said seat just to try out the table, unwittingly emitted an orgasmic cry, and heads turned as I was yelling, YAY!!, because the chair was heaven. Tonight you will be mine, I whispered to the chair under my breath and swivelled a little. It was hard to part from her (the chair), yet part we did and I proceeded to perform the following tasks:

I almost came to like Ikea. But then I wouldn’t because I hate everything. On principle. 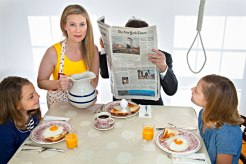 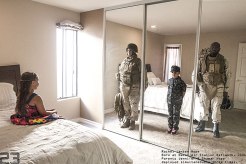 If Classic Writers Wrote for the Internet…

If Classic Characters Had Mugshots…

If Classic Writers Could Read These Reviews…