I don’t do things like being in the present, enjoying the moment, feeling happy and similar shit. In part because I don’t want to and in part because I’m not able to, which is presumably interrelated. Despite my relentless cynicism, I was surprised by the experience of a sort of a transcendental moment. It involved the toilet and the cat. It’s not as you think.

The cat pays me regular visits in the bathroom when I’m using it. I regard it as a sign of affection. As I was sitting on the toilet, doing my thing, the cat came, sat at my feet and stared at me, blinking slowly. I choose to interpret this probably random behaviour as my cat telling me she hates me the least. I was deeply touched. Insofar as I can be touched, that is.

I said, Awe, and, Mommy hates you the least too. I cuddled the cat, forgetting that I was in the middle of something, and noticed, as though I never saw it before, how cute she actually is. Not only is she particularly soft, she also has a fine fur pattern with a lovely brown tint, especially on her face. I really enjoyed this encounter. Likely, I was just high on my evening meds.

This is going to be another mental post. Sorry about that. It’s not every day that you’re freshly released from the madhouse though, so I’m naturally full of it.

I normally focus on what I failed to do rather than on what I managed to do. Because logic. When I did it, it requires no further attention. When I failed to do it, then something was wrong and the situation needs to be analysed to avoid recurrence.

Despite myself, I now keep a list of my daily achievements. “Achievements”, that is. Doctor’s advice. When I look at my lists, it’s supposed to encourage me, but I suspect it might be making me more depressed because of the nature of my “achievements”. It’s typically something along the following lines:

I was being brave today. Look at what I’ve managed:

Now will you please excuse me, I have to go and consider whether listing my pseudo-achievements cheered me up or made me suicidal. (If I’m not back, it’s the latter option. Kidding.)

During my delightful stay in the psychiatric ward, I picked colouring mandalas. It wasn’t as much by choice as rather by force. Obligatory therapy. I hated it to start with. Then I got the hang of it somehow.

I still maintain that colouring is an activity suitable for five-year-olds and idiots, if you pardon me, not for a high-achieving educated adult. Against my better judgement though, I equipped myself with a cat mandala colouring book and a set of crayons. My health insurance didn’t cover these obviously therapeutic tools.

Colouring cats is weirdly calming. It’s a no-brainer. But I’m performance-focused and goal-oriented, so I take the shit seriously. I set out to colour as many cats as perfectly as I can and more. I’m not progressing as well as I’d have it, so it sometimes makes me more depressed than I was to start with. I’m apparently beyond help.

We are all alone, born alone, die alone, and—in spite of True Romance magazines—we shall all someday look back on our lives and see that, in spite of our company, we were alone the whole way.

The first thing after I wake up is to look at my phone, with anxiety, to check what bad news, complications and problems have arisen while I was indisposed sleeping. What I found today on the phone though was uplifting comments from fellow bloggers on my yesterday’s post. I was almost pleased. (I’m depressed, hence I don’t posses the capacity to be wholly pleased.) I think it’s therefore commendable to say thank you to my readers. It was quite a warm welcome back to the community after I’ve been AWOL forever. One feels less alone online.

I’ve always known I’m crazy. What’s new is that now I’m certified crazy. If you’re concerned that the condition might be contagious, I advise that you keep clear of this place.

I was wondering the whole summer how long one can last a fourteen-or-so-hour workday every day before ending up in the mental asylum, and in autumn, I got the answer: I managed about three months. Then I indeed ended up in a mental asylum.

Should you be curious about the technicalities, one day I decided I just couldn’t, so I turned myself in at the local hospital in the middle of the night, was admitted as an emergency case and put away on the locked floor B in the psychiatric ward. After a week, I graduated to the open floor C and took a six-week survival course. I was let go a week ago, with depression, anxiety and four kinds of meds.

Because my depression experience might sound depressing, for comic relief, here’s a list of fun facts I found out about the madhouse while in there:

As I broke down from overwork, I was prescribed, among other things, returning to my hobbies. Which is why I’m finally getting down to blogging, albeit in a mad manner. I can afford that though, since I’m certified mad. 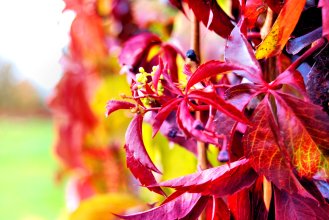