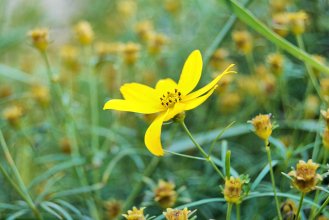 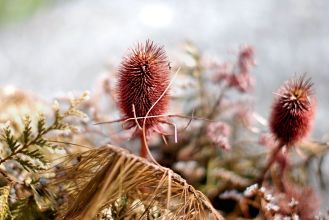 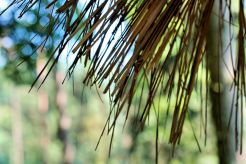 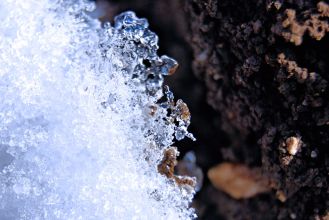 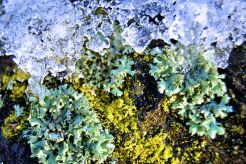 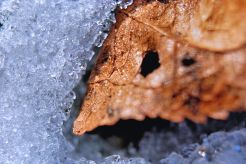 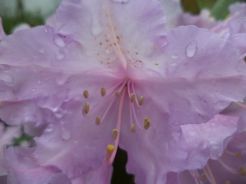 Lucile, a life saving friend and blogger, is reopening her Photo 101 Rehab! Here is my contribution on the topic of rain drops. What you see is a bad photo masquerading as an artsy photo. Here is what I did in Corel PaintShop Pro X6 to make a blurry and badly lit picture look like I never meant it another way.

A reminder of summer in response to WordPress Photo Challenge: Yellow.

Two weeks ago, prompted by the lovely Justine and her Eclectic Corner challenge, I presented an ambiguous photo and asked you to guess what it is. Papict tuned in first and identified the picture straight away as the veins in a leaf. I had a hard time creating a diversion from this correct guess! At this point I realised that I didn’t know what kind of leaf exactly it was, and I imagined a mob of angry botanists storming my house and demanding that I procure a sample for them to classify. Armed with poisonous hemlock, brandishing cacti and thorn-studded armour, the botanists would prepare for me a slow and agonising death, which would be streamed live on the blog.

Much to my despair, Liz went on in the same vein, guessing leaf veins, osmosis-like straws. Of course I had to google osmosis and ban Liz for being too smart to participate. Joke. Trent continued in blasting any sense of mystery and laconically observed that it was snowing on my leaf, referring to the snow descending all over the blog and creating an odd contrast with my summer photos. Andy wondered if Lucile and me were frequenting the same pot/cabbage shops in Amsterdam and sought advice on the proper technique of cabbage smoking. He nearly exposed our secret plot to overthrow democracy and establish the dictatorship of the cabbage.

I resorted to cabbage smoking as Justine came over and guessed leaf, undermining her own game. She also called me tarty kitty only because I virtually married two fellow bloggers without her consent, her being my fiancée to be married at Christmas. Joke. Or not. Lucile arrived smoking a smart cabbage pipe and outwitted me by announcing that the photo depicted the leaf of a malus sylvestris. Google enlightened me that this was Latin for crab apple, and I recalled that we indeed had apple trees in the garden. It became obvious that Lucile was one of the evil botanists in disguise on her way to force-feed me hemlock. Her guess was not just correct, it was hypercorrect.

Desleyjane comforted me a bit by guessing the back of a lizard, but then she spoilt it all by second-guessing a leaf. Lisa expressed her discomfort at the news that besides other atrocities of the world, there are killer botanists. Bor Bor Igmus feared that it might be a leaf mimicking, blood thirsty, soul-sucking spider that camouflages itself in order to sneak up on its hapless prey. Second guesses included a leaf mimicking alien invader from the planet Chartreusia, a man-eating locust and a cabbage-eating moth. Albert offered that it might be my veins because I’m a green-blooded Vulcan. Live long and prosper. And Tightshot concluded it could be a green iguana, a green snake or star fruit.

Thank you for everyone’s guesses, it was only you who made the guessing so much fun! And sorry to have disappointed anyone’s boundless fantasy by snapping a meagre apple tree leaf. I’ll do better next time. Or not. 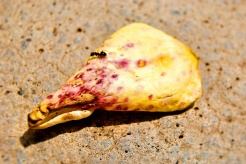 My submission to today’s Photo 101 Rehab group was inspired by the fellow patient desleyjane’s cornflakes-carrying ants. I went for a petal-carrying ant here. Alternately, an ant-carrying petal.

The photo was taken with Nikon D80 and Kenko macro extension tubes and processed in Corel PaintShop Pro X6. Here is what I did to it: 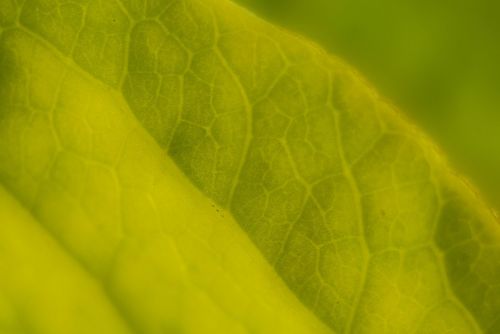 Can you guess what you see? If so, let me know in a comment! Then hurry over to the Electric Corner, a new challenge hosted by the lovely Justine. You can take part in the guessing game too!