The first night in a new flat is much less fun than publicity suggests. Stock images represent this life situation as a cheerful young couple sitting on a scrubbed floor, wearing clean clothes and drinking wine while leaning against an occasional paper box. This is so very wrong. The actual experience involves boot prints, cardboard shreds, dirt and dust and bruises and cuts. As an extra, appliance malfunctions, thermal discomfort and bug attacks may be included. The ordeal is not entirely unhumorous, but hysteria along with hilarity may creep in.

The drama queen that I am, I welcomed the first minutes spent alone in my new rented flat with a hysterical seizure. I was so bloody relieved to be finally left alone that I sat on the filthy floor and either cried or laughed or both, as I couldn’t decide for one. I grew soon bored though, and as tissue supplies weren’t unpacked yet – nothing was unpacked yet – I quit the nonsense and proceeded to deal with practicalities. First, unpack the FIRST AID box and fish out coffee. Second, remove packaging material from a brand new kettle and put the kettle on. Third, find an unsmashed mug for the coffee.

Then I lost the count of steps. In the haze of exhaustion, I changed into yoga trousers and a pair of old flats and embarked on the mission to drive the occupants of the unit below me mad by shuffling and reshuffling boxes and tappity-tapping on my low but noisy heels late into the night. The place was freezing, which wasn’t much of an issue earlier in the heat of the heavy-weight box lifting. The floor heating was operated by three sophisticated thermostats, all of which I now set to the sensible 22°C, though the lowest liveable temperature for me is 26°C, as I’m a cold-blooded lizard.

Several hours later, still nothing was happening heating-ways, and I started to fear I might die here of exposure. Desperate times require desperate measures, I thought and unpacked a small electric heater that I was saving as the last resort. I plugged it in, and nothing happened. It apparently expired quietly during the transport and no amount of coaching and kicking made it work again. I dragged it angrily in the litter bin by its tail – the plug. Meanwhile, the thermostat temperature had been set to its maximum, 35°C. And guess what was happening. Nothing.

I retired to the bathroom, finding comfort in the knowledge that at least there was an electric ladder, so I could sleep curled up under the sink and soak in the warmth. The ladder, however, wasn’t working. What a surprise. I soon figured out that the problem wasn’t in the ladder but in the socket and, as I’m a smartass lady, I used one of my Ikea extensions for the plug to reach a socket across the room. There was a slight inconvenience in that the stretched cord created a knee-height obstacle for me to jump over. Or to forget it, stumble on it and tear it forcefully out of the socket. 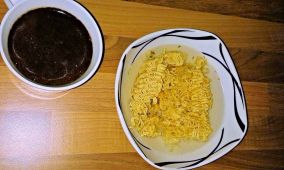 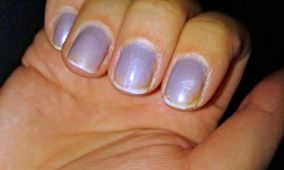 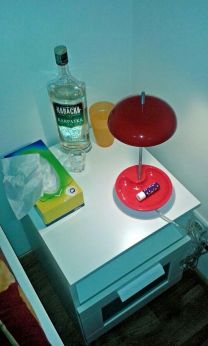 The ladder soon heated up a little. A little turned out to be the most it could do. Reconciled with my frosty fate, I returned to the room – the place is a bedsit, hence one room – and to cheer myself up, I waged a war against an invasion of lacewings. These flying bugs are significantly uglier than their stupidly cute name suggests, and they were creeping on me from all directions. I sucked half of an army with a vacuum cleaner and butchered the remaining forces with my bare hands. Protected by a thick paper towel, of course, as I eschew bugs. Eschew is not to be confused with chew.

On the chewing note, I recalled I had eaten nothing the whole day. Time to make some Asian noodles. As I was attempting to relocate the food from the bowl in my mouth, I noticed I was shaking ridiculously. I can’t say that I didn’t spook myself a little. A lot. I concluded that it was fatigue as much as cold, finished the painful meagre meal and decided to take some serious measures. Because this is Eastern Europe, I unsealed the BOOZE box and prescribed myself some slivovitz. Some more. Finally I climbed in bed wrapped up like in Irkutsk, with the slivovitz bottle resting on my bedside table. Cheers.

55 thoughts on “The First Night in a New Flat; or, The Horror, the Horror”

This site uses Akismet to reduce spam. Learn how your comment data is processed.